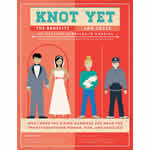 Knot Yet: The Benefits and Costs of Delayed Marriage In America

What does the rising marriage age mean for twentysomething women, men, and families?

One of the most important social developments of our time is the recent rise in age at first marriage, which now stands at 27 for women and 29 for men–a historic high. Delayed marriage in America has helped to bring the divorce rate down since 1980 and increased the economic fortunes of college-educated women, according to Knot Yet: The Benefits and Costs of Delayed Marriage in America, a new report from the National Campaign to Prevent Teen and Unplanned Pregnancy, the National Marriage Project at the University of Virginia, and the RELATE Institute. But another important consequence of delayed marriage is that most Americans without college degrees now have their first child before they marry. By contrast, the vast majority of college-educated men and women still put childbearing after marriage. Knot Yet explores the causes and consequences of this revolution in family life, especially the ways that delayed marriage is connected to the welfare of twentysomethings, their children, and the nation as a whole.