Overview and Background of the African American Community

African-Americans/Blacks comprise 13.5 percent or 40.7 million people as of July 2007, according to the U.S. Census. Previously, the largest racial minority in the United States, the Hispanic population now outnumbers the African American population. African Americans live throughout the United States but are predominantly located in the South East and along the Eastern seaboard. See map here.

The terms African American and Black are used interchangeably here and refer to residents of the United States who have origins in any of the black populations of Africa or the Caribbean.

Marriage in the African American community appears to vary based on educational attainment and income, especially among men as potential marriage partners for African American women. Marriage appears to contribute greatly to the economic well-being of African-American families.

Marriage in the African American Community

During the last decades the rates of marriage in the black community have declined while the rates of divorce, separation, cohabitation, out-of-wedlock births, and children residing in female-headed households have increased. These trends are contrary to the reported cultural values. 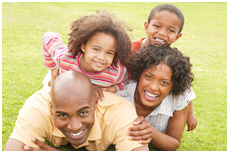 Cultural beliefs related to marriage include:

• The 1987 wave of the National Survey of Children found that 63% of black females and 69% of black males agreed or strongly agreed "unless a couple is prepared to stay together for life, they should not get married," compared with 84% of non-black youths (Moore & Stief, 1991).

• African American teens are less likely to date or participate in serious romantic relationships than teens from other racial/ethnic groups (Cooksey et al. 2002; Crissey 2005). They are also less likely to say they expect to get married, even controlling for their more limited dating experience (Crissey 2005).

• 88% of African American teens view marriage as important, however, only 72% feel well prepared for marriage.

• Churchgoing African American married mothers are 31% more likely to report that they have excellent relationships with their husbands.

• According Donchell Johnson, owner of www.forblackweddings.com, "jump the broom" is a symbolic way that African American slaves legitimatized marriage, when marriage was not legally permitted. The broom is a symbol of sweeping away the old and welcoming a new beginning. The hop the couple takes over the broom represents the leap of faith they take when starting a new life together. African American couples do this at the conclusion of their wedding ceremony.

• African-American mothers in urban cities (according to the Fragile Families and Child Well-being Study) have strong "pro-marriage" attitudes yet they are the least traditional in their attitudes about gender roles in marriage.

• Only 45% of African American households contain a married couple, compared to 80% for Whites, and 70% among Hispanics. (U.S. Census)

• In 1890, 80% of African American households were comprised of two parents. One hundred years later, only 40% of African-American children live in married-couple households.

• African Americans are significantly less likely than other racial/ethnic groups to ever marry, less likely to remarry, more likely to divorce, separate and cohabit and bear and rear children out-of-wedlock (and in mother-only households).

• One explanation for lower marriage rates among women, as identified by blackdemographics.com, is related to the earnings potential among black men. With higher college graduation rates among African American women, the median income fell 12% for Black men while rising 75% for the women from 1974 to 2004. A high-earning woman has little incentive to marry a low-earning man.

• Black women divorce at a rate nearly double of either white or Hispanic women.

• Higher mortality rates due to poor health care, violent crime, and ever growing incarceration rates, have been shown to decrease the African American male population. This may be linked to the increasing numbers of Black women struggling to raise children and manage families alone. 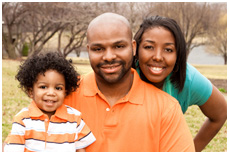 Responding to the Black Marriage Crisis: A New Vision for Change by: Linda Malone-Colon, Institute for American Values, Future of Black Family Series, No. 6, June 2007.

Marriage and the African-American Community by: Ron Haskins, The Brookings Institution, 2001.

Marriage and the Well-being of African American Boys by: Linda Malone-Colon and Alex Roberts, Institute for American Values, 2006.

The Benefits of Marriage for African American Men by: Claudia Sitgraves, Institute for American Values, 2008. 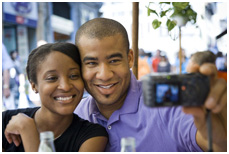 The State of Our Unions: How Black Married Couples can Keep the Love Alive

The National Center on African American Marriages and Parenting

Happily Ever After: A Positive Image of Black Marriage