Overview and Background of the Native American Population

There are 4.9 million Native Americans in the United States. Yet, they make up only 1.6 percent of the total U.S. population and are the second smallest ethnic group in the U.S. The states with the highest concentration of Native Americans are California, Oklahoma, and Arizona.

Native Americans (referred to as American Indian or Alaska Native by the U.S. Census) are a very diverse group. They represent 562 different tribes and speak 292 different languages. The traditions of these various tribes influence family structure, gender roles, and marriage. As one Tribal Elder states: "There is cross-over and connection [among the tribes] but there are also many differences in the traditional ways depending on the tribe. What people have to know is that there is no pan-Indian way of doing things." There are some common threads among Native Americans, however, that include the value of extended families and caring for each other.

In 2007 there were 537,500 American Indian and Alaska Native families in the U.S. Of these families, sixty percent were married-couple families with children. However, less than half of these married couples are living with their biological children. A higher share of Native American births is to a never-married mother (58.4% compared to 33.2% for the US as a whole).

Marriage in the Native American Community 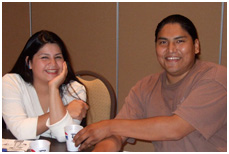 "Marriage" is less of a relevant cultural concept than family. Not all tribes or clans have "wedding ceremonies" and the concept/definition of marriage is locally derived. Therefore, very little research has been conducted on Native American marriages. One study with a large sample of Native Americans, however, found that Native Americans, on average, ranked marriage lower in importance than people in all other major racial or ethnic groups.

Cultural Beliefs Related to Marriage
• Common American Indian traditions include oral teachings and learning by observing and through experience. Use of Native languages is closely tied to teachings and culture. More than a quarter (27%) of Native Americans speak a language other than English at home.

• When it comes to defining marriage or family, there is much variety among tribes. Many tribes have a clan system that is actively involved in childrearing and have elders who engage in family life, e.g., they educate children on their cultural history. One study found that sixty-two percent of Native Americans disagreed or strongly disagreed with the statement that having children was one of the main reasons to get married. This could be because of the communal responsibility of childrearing in some traditions. In the Navajo tribe, for example, grandparents and fellow clansmen-referred to as "brothers" and "sisters"-are considered part of the family and carry the responsibility of family members.

• Based on the tribal/clan definition of "marriage" data on "out-of-wedlock" childbearing may or may not be accurate. A higher share of Native American births is to a never-married mother (58.4% compared to 33.2% for the U.S. as a whole).

• Native Americans are less likely than were those in any other race/ethnic group to report that they had been involved in a marriage preparation class.

• Native Americans highly value traditional beliefs concerning relation, harmony, balance, spirituality, and wellness; as part of valuing "relation" all these beliefs are interrelated. Therefore, "relation"-ships are core to their values.

Marriage and Divorce
• Approximately 39% of the American Indian/Alaska Native population is currently married (excluding couples who are separated). The same percentage has never been married, and approximately 13% are divorced .

• More than half (56%) of Native Americans are married to individuals from other racial or ethnic groups.

• The proportion of Native American families with an absent mother or father is twice that of the general population. 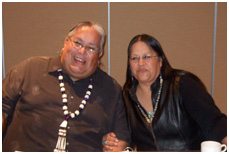 Delivering Marriage and Relationship Education in Native American Communities is a tip sheet for practitioners to assist in effective program implementation.

Tribal Marital Systems Research Brief by Sidney Stone Brown, PsyD is a publication on the NHMRC which examines marriage in the Native American community.

The Context and Meaning of Family Strengthening in Indian America. This Annie E. Casey Foundation report looks at the implementation of family strengthening programs by incorporating child welfare, healthy relationships, and community support.

Native American Fast Facts (2004). This brochure, developed by ANA, provides a brief description of the Native American Healthy Marriage Initiative (NAHMI) including goals, targeted strategy, funding opportunities, and training and technical assistance resources. It also includes some statistical data on Native communities and reasons as to why marriage matters. It is available at 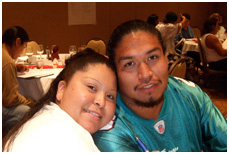 The Native Wellness Institute is a non-profit organization serving as the leading provider of Native-specific and wellness-related training and technical assistance (strategic planning, program design and curriculum development) to Native people, communities, tribes and organizations throughout North America. The group's trainings are designed to improve the physical, spiritual, emotional and mental well-being of Native American communities. More information is available at www.nativewellness.com.

The American Indian Policy Center is a research organization designed to provide government leaders, policy makers and the public with accurate information about the legal and political history of American Indian nations, and the contemporary situation for American Indians. The Center's website is www.airpi.org.